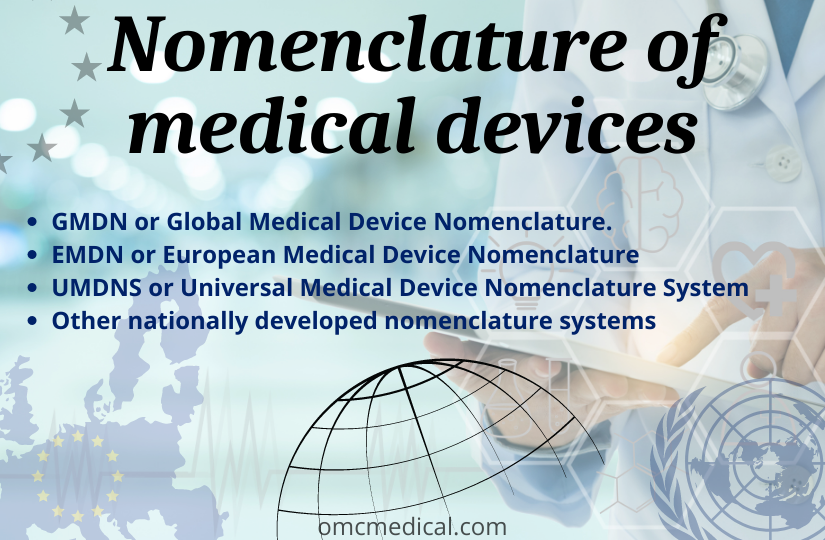 What is the nomenclature of medical devices?

To simply put it, the nomenclature is the naming of a medical device. Although medical devices are classified into different risk classes, they should be named so that it is universally identified. Standardised nomenclature facilitates this easy identification.

A nomenclature is needed to simplify trade and tracking among the different regulatory authorities, Ministries of Health, and other organisations that regulate medical devices.

A standardised nomenclature aids in the following aspects:

The different device nomenclatures available are as follows:

About 10% of countries use Global Medical Device Nomenclature worldwide. It is a system of internationally accepted descriptors used to identify medical devices. The GMDN Agency manages GMDN codes, a non-profit organisation.

GMDN is a 5-digit code containing the following information:

GMDN was introduced for a variety of regulatory purposes. GMDN is based on the ISO 15225: Medical device nomenclature data structure’. Read more about the frequently asked questions about GMDN here.

The European Medical Device Nomenclature is characterised by its alphanumeric structure and is established in a seven-level hierarchical tree where it clusters medical devices into three primary levels:

Universal Medical Device Nomenclature System or UMDNS was developed by the Emergency Care Research Institute (ECRI). Many nations have adopted this standard around the world. UMDNS is used in inventory control, work order control, and regulatory systems applications. It is a 5-digit code unique code and a term for different types of medical devices. One can find the UMDNS code list here. UMDNS is updated monthly.

CND nomenclature or ‘Classificazione Nazionale Dispositivi medici’ was developed by Italian Ministry of Health. In addition to Italy, it is also used in Portugal and Greece. The guidance document on CND nomenclature explains the basic principles and structure of CND, which also applies to EMDN as EMDN was adopted from CND nomenclature. Following this, medical devices are clustered into three levels:

Is UDI the same as GMDN?

Can EMDN be accessed free of charge?

The EMDN is accessible to all stakeholders- free of charge. Hence, it can be utilised by a non-exhaustive list of stakeholders such as manufacturers, patients, research organisations, practitioners, hospitals, etc. The EMDN can also be downloaded from here.

Is there a guidance document that helps economic operators to map the EMDN information into the forthcoming EUDAMED database?

Yes, there are two guidance documents released by the EU commission