Manual on Borderline and Classification of Medical Devices 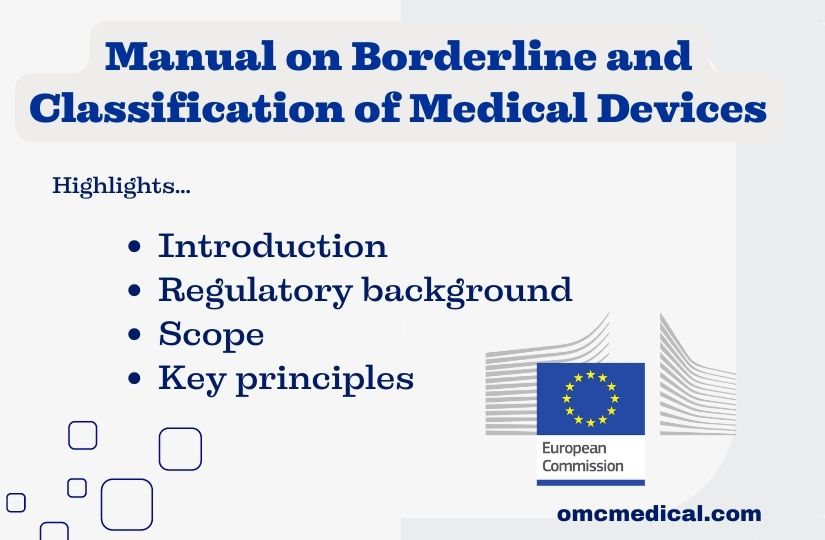 New guidelines on how to distinguish between medical devices and medical products under the Medical Devices Regulation have been published by a working group of the European Commission (MDR).The new recommendations from the European Medical Device Coordination Group (MDCG) cover “borderline products” that are difficult to classify as either medical devices subject to the MDR requirements or medical products for human use subject to the requirements of Directive 2001/83/EC (MPD) for CE Marking.

The agreements reached by the Member State members of the Borderline and Classification Working Group (BCWG) following the exchanges under the Helsinki Procedure in accordance with Regulation (EU) 2017/745 on medical devices (the MDR) and Regulation (EU) 2017/746 on in vitro diagnostic medical devices are explained in the document, which will be referred to as the manual (the IVDR).

The specific document here explains the goals and workings of the Helsinki procedure. The BCWG is presided over by the European Commission and comprises observers from a number of stakeholder associations and representatives of all Member States’ relevant agencies.

The document outlines the methodology for classifying medical devices per the new regulatory framework. At the same time, the document itself is not legally binding and is not meant to establish new regulations or responsibilities. Instead, it further explains the relevant regulatory requirements and suggests considerations for ensuring compliance. It is clearly emphasised that the current document is not intended to represent the EC’s official viewpoint. Additionally, should it be deemed reasonable to do so to reflect comparable adjustments to the underlying rules, the MDCG maintains the right to make changes to the document and suggestions included within.

As a general rule, it is the responsibility of the authorities of the Member States where a product is on the market to determine whether it qualifies as a medical device and to apply the classification requirements. The MDCG also recognises that there may be variations in the methods used depending on how the applicable classification rules and regulations are interpreted. The MDCG believes it is crucial to create a widely followed protocol that will be adhered to by all parties engaged in activities involving medical devices in the EU. The agreement that the Member States reached following their interactions under the MDR and IVDR of the Helsinki Procedure is described in the manual.

The manual defines borderline cases as situations where it is not immediately evident whether a particular product is a medical device, an in vitro diagnostic medical device (IVD), or neither. Additionally, it is indicated that some of the requirements found in other articles of the Regulations, including those that list the products exempt from the Regulations’ purview, may also be applied. However, in some circumstances, even if the product in question does not fit the definition of a medical device or is expressly exempt from regulation under the regulation, other EU-wide rules or national regulations may still apply.

These situations are not covered by the present manual, which only covers the aspects of using the qualification rules outlined in the Regulations. The document also refers to the MDCG guidance on the distinction between medical devices and pharmaceuticals under the Medical Devices Regulation (EU) 2017/745, as well as the relevant guidance on the qualification and classification of software under Regulations (EU) 2017/745 and 2017/746.

The relevant regulations further state that after it is established that the product in question is a medical device, a risk-based classification should be carried out, resulting in the device being given the proper risk class (from I to III). The risk classes to be used are A, B, C, and D if the product under consideration is a medical device for in vitro diagnosis. As was previously indicated, under some circumstances, it becomes challenging for the competent authorities of the Member State to apply the requirements for medical device classification uniformly. The competent authority should make its choice on a case-by-case basis, considering the details of the product in issue, as the suggestions offered in the current handbook are not all-inclusive.

The following are only a couple of the instances given by the MDCG:

A nasal spray containing COVID-19 antibody is intended to render the virus inactive. Before anything else, it’s critical to identify the primary mode of action or how the product fulfils its intended function. In this scenario, the main goal of the spray is accomplished by antibodies attaching to the virus; as a result, the virus cannot replicate and infiltrate mucosal cells. Furthermore, it is said that a product that meets the general definition of a medical device is one whose intended action cannot be accomplished through pharmacological, immunological, or metabolic methods. Accordingly, based on this criterion, the product in question should be controlled as a medicinal product rather than a medical device.

Graphite crucible used to create pictures of the patient’s airways using Technetium-99m radionuclide (to prepare an aerosol). While a gamma camera is used to capture an image, such an aerosol should be inhaled. Any medicinal preparation that, when ready for use, has one or more radionuclides (radioactive isotopes) incorporated for medicinal purposes are radiopharmaceutical, according to the appropriate regulations. A kit is any preparation that must be reconstituted or mixed with radionuclides in the finished radiopharmaceutical, often before administration. Due to the product’s intended use and planned mode of operation, it does not fulfil the definition of a medical device in this specific instance and is, therefore not subject to regulation under the medical device framework.

Borderline Between Medical Devices and Biocides

The guideline also explains the crucial distinctions between medical devices and biocides, governed by Regulation (EU) 528/2012, which deals with issues pertaining to biocidal goods intended for marketing and use in the EU. The authority also offers many instances to illustrate the methodology used when making such a conclusion. For instance, an antibacterial and antiviral concentration is described in the first example as a water-based treatment for textile materials. In this situation, the treatment in question does not fulfil the definition of a medical device. It should not be regulated as one because it is designed to affect the features of other items rather than apply to specific patients.

Other Types of Products

The guidelines scope also includes topics pertaining to substances with human origin, cosmetics, food, and personal protective equipment. A rescue bag is the first product that is described. It transfers patients during rescue operations to ensure their care and safety. Such a bag, in particular, comprises components meant to guarantee the patient’s mechanical protection while transported, including various transport mechanisms. The main goal of the rescue bag is to prevent the patient’s condition from worsening due to any environmental influences during the rescue. According to the authority, the product should be classified as a medical device because its intended use conforms to the medical purpose of easing or compensating for an injury or handicap, as stated in Art. 2(1) of the MDR; nonetheless, according to Rule 1, the risk class should be MDR class I.

Another illustration in the manual explains the Plexiglas box for caregiver protection, which is meant to be utilised to lower the dangers associated with the infection that could be spread during procedures. In this regard, the authority explains that a product should not be classified as a medical device if its only purpose is to protect a caregiver or healthcare professional by preventing exposure during a medical or surgical operation. Further, since a medical gadget is supposed to be used to safeguard the patient, such a motive could not possibly be its intended use.

What does the Helsinki Procedure mean?

The Helsinki Procedure is a procedure that “allows consultation among competent authorities (CAs) on borderline and classification issues concerning medical devices and to guarantee that relevant guidance is provided in the Manual on Borderline & Classification for Medical Devices.

Disclaimer: Regulations/legislations are subjected to changes from time to time and the author claims no responsibility for the accuracy of information.