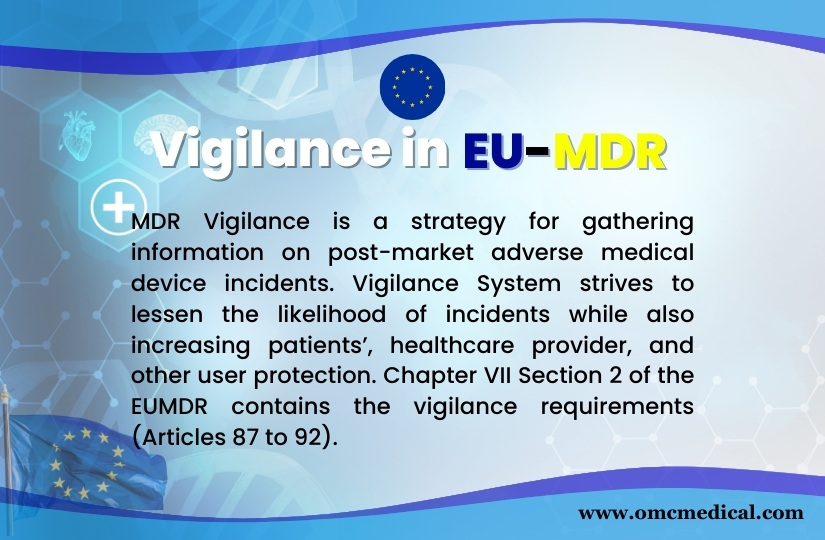 The Medical Device Vigilance System’s goal is to lower the risks of using medical equipment and serious incidents while it strives to improve protection for patients, healthcare providers, and other users. A National Competent Authority Report is one way that adverse occurrences are evaluated and, where necessary, information is shared according to the Medical Devices Directives/Regulations (NCAR). The implementation of suitable field safety corrective measures aims to prevent the repetition of such events. To facilitate and harmonise the execution of the EU regulations on Medical Devices by manufacturers and competent authorities, general recommendations on vigilance are added to the Medical Devices Regulations.

Manufacturers of medical devices are obligated by law to report adverse incidents and Field Safety Corrective Actions (FSCAs) to EU Competent Authorities in accordance with the European Medical Devices Regulations and the In-Vitro Diagnostic Devices Regulations. Regulators are frequently perplexed by the “when, what, and to whom” part of EU incident reporting. Companies that disclose incidents incorrectly risk serious repercussions. RA professionals must take the initiative because ignorance is not a valid justification for failing to report problems.

Requirements for Vigilance Reporting According to EU MDR 2017/745

The following events are considered as “reportable events” in accordance with the new EU MDR when they directly involve a medical device:

The Timeline For Vigilance Reporting (as per MDR ARTICLE 87)

When are EU vigilance reports necessary?

In accordance with MEDDEV 2.12/1, an incident report must be made if a device malfunction, decline in device performance, inadequate instructions, or inadequate labelling results in death or serious injury, or if it could result in death or serious deterioration of state of health if it were to occur again. The incident has to be notified to the member state’s Competent Authority (CA), depending on where it happened.

In Europe, below are the fundamental procedures to report an incident:

Vigilance as per EU MDR compared to the MDD

It was challenging to distinguish between Vigilance and PMS in the Medical Device Directive (MDD). In the European Union Medical Device Regulation (EU MDR), a distinction is made between “post-market surveillance” (PMS), which is the periodic reconfirmation that the benefits of the device continue to outweigh its risks, and “vigilance,” which is the identification, reporting, and trending of serious incidents and the conduct of safety-related corrective actions.

When the frequency or seriousness of additional incidents significantly increases, the EU MDR also mandates vigilance reporting. As opposed to the MDD, trend reporting (Article 88) and analysis (Article 89) were already directed by MEDDEV 2.12/1 and had been anticipated by European Competent Authorities and Notified Bodies for some time.

The necessity to submit vigilance reports to the EUDAMED database (Article 92), as opposed to each national Competent Authority, as required under the MDD, is a new requirement in the EU MDR. The national vigilance reporting methods will continue to be used, though, until the vigilance module of EUDAMED is available.

To Whom Should Medical Device-Related Incidents Be Reported?

Medical device-related adverse events must be reported to the relevant national competent authorities where they occurred.