Registration of Legacy Devices in EUDAMED 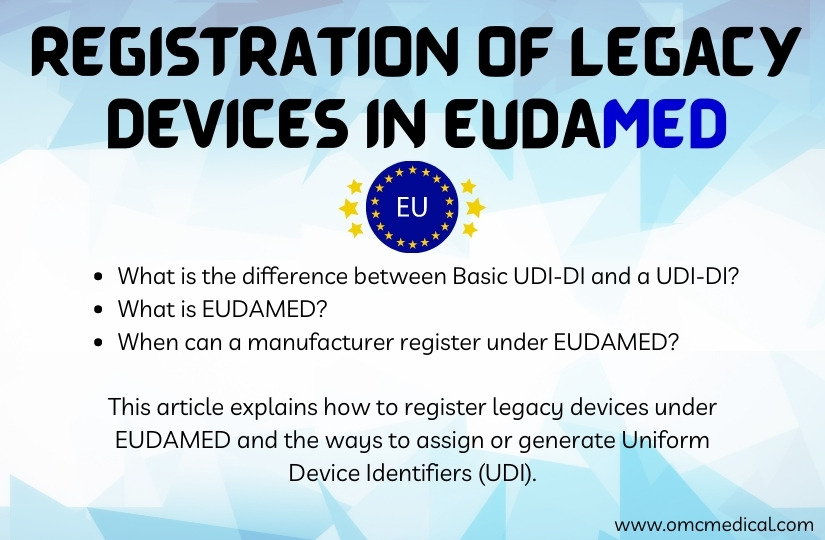 Legacy Devices are the medical devices covered by a valid Directive certificate under Directive 93/42/EEC or Directive 90/385/EEC and continue to be placed on the market after the date of application of Regulation (EU) 2017/745 (MDR). Those devices should be registered under EUDAMED without Basic UDI-DI and a UDI-DI within 18 months after the application is placed or 24 months if the EUDAMED is not fully functional before the date of application. This registration is mandatory for the manufacturer in case of any serious incidents and if any field safety actions have been taken, at least before the final vigilance report is submitted.

As per MDR device requirements, any medical device registered under EUDAMED will require Basic UDI-DI and UDI-DI, which gets reflected on the database design for future reference.

As per the flowchart above,

What is the difference between Basic UDI-DI and a UDI-DI?

Basic UDI-DI is a DI assigned to the level of unit use of the device, which is a primary identifier for the device model/family . It is mentioned in the reference CE certificates and the Declaration of Conformity. In contrast, UDI-DI is a unique numeric or alphanumeric code of each device itself , which is used as an access key for the UDI database.

When can a manufacturer register under EUDAMED?

The manufacturer can register their device information/UDI voluntarily in EUDAMED. Moreover, it is mandatory to register legacy and regulatory devices within 24 months after the Commission publishes that the EUDAMED is completely functional.